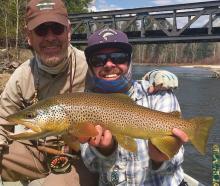 Jason Brininstool has been an independent fly-fishing guide based out of Missoula for a decade. The rivers he works include the Blackfoot, Bitterroot, and Clark Fork, as well as the Missouri, the Smith, the Beaverhead, and Big Hole. He has also guided multi-day trips on the South Fork of the Flathead within the Bob Marshall Wilderness.

Jason has also worked as a backcountry guide and rock and ice climbing guide in New Hampshire and Maine, then spent several seasons as a backcountry wilderness ranger in the Frank Church River of No Return Wilderness in central Idaho. Jason has spent the past decade traveling during the winter months throughout Central America, with the last four years spent in Indonesia and the Philippines.

In speaking to his role as Advocacy Chair, Jason has worked on initiative campaigns in Montana to ban cyanide heap leach mining on the upper Blackfoot (I-187), as well as a resolution to cap campaign finance donations in Montana state elections. He has held board positions with the Fishing Outfitters Association of Montana as the Guide-at-Large Representative, the Sierra Club chapter in Missoula as a fundraising chair, as well as on the local board chapter for Montana Conservation Voters.

Jason carries an undergraduate degree in Sociology/Political Science from Longwood University in Virginia. He earned a Master of Science in Environmental Studies from the University of Montana with a certificate in Natural Resource Conflict Resolution from the law school at the University of Montana. During his time at UM, Jason received the Sargent Fellowship award from the Cinnabar Foundation for my community work with the Sierra Club and Montana Conservation Voters.