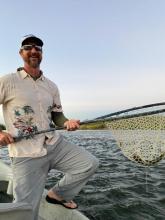 Miles Nolte currently works as the Director of Fishing at MeatEater. Having created the series Das Boat, Miles also serves as the show’s writer and producer as well as the co-host of MeatEater’s Bent podcast.

Before taking his most current position in 2019, Miles worked a fishing guide in Montana and Alaska for 15 years. He’s worked in fishing media since the early 2000s—was the angling editor at Gray’s Sporting Journal from 2013-2019; wrote The Alaska Chronicles, a book detailing one of his seasons as a fishing guide in Bristol Bay Alaska in 2007; wrote and helped produce short fishing films for brands such as Sage, Redington, and Yeti. Miles’ freelance work has appeared in numerous publications including, The Drake, Fly Fish Journal, American Angler, and others.